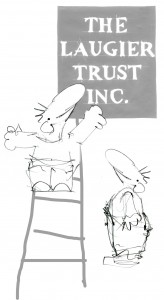 The second film I worked on was “Superman Two,” in 1979 at Pinewood Film Studios. The film would open with the three villains standing in front of the ‘Ice Palace’ set that had been constructed in one of Pinewood’s massive stages, but the scene would actually be filmed against a blue screen (then known as a ‘travelling matte’). As long as the camera stayed completely still, the blue in the picture could later be replaced in the laboratories by another image and in this case it would be a picture of a model of the set. The Production Designer handed me a sketch of what he wanted.
“Could you just work out a projection, Paul” he said, “Use a 50mm lens with 5 degrees of tilt up.”

My muffled gasp of horror must have sounded like some sort of confident assurance and he vanished back to his office leaving me wondering whether to admit that I’d never done a projection before. All I knew about projections was that they were devilishly complicated. Vague memories of a drawing in my ancient BBC manual assured me that I needed the book, and now!  It was almost lunchtime so I leapt on my motorbike and rushed back to the caravan I was living in at the time. Sure enough, the basic information was there, but I still needed to know the vertical angle of the lens. I found a cinematographers’ manual in the office and this gave me the necessary details to get to work on my new puzzle.  My boss returned a couple of hours later, glanced at the drawing approvingly and went off to his office with it. The model was built and superimposed behind the baddies for the first scene of the film so I guess it must have been more or less right.

We were all working under tremendous pressure in an environment where everyone had to get on with everyone else. We sometimes got on each other’s nerves but there was no time for disagreements, we had a job of work to do. The sense of being part of a surrogate family was never greater than the day that the thousandth drawing rolled off someone’s board and the office junior was sent out for champagne! In this rare moment of relaxation, one of the Art Directors shared with us his observations on the six stages of making a film:  Euphoria (the day they offer you the job), Depression (when you realise you’re going to have to work twelve to fourteen hours a day for several months to get it done), Panic (when you realise that you’re still not going to get it done on time), Find the guilty (when a witch-hunt is organised to find out who caused the delays, mistakes and so on),  Blame the innocent (usually someone who has just left) and finally, Give credit to those not involved. This last item brought wry smiles from the more senior members of the Art Department but hit hard with the draughtsmen, who had just been informed that, despite a five minute roll of screen credits which included people we had never heard of, none of us would have our names on the crew list.

We rarely had time to discuss this as we were heavily involved in drawing up the New York street set that would be one of the biggest ever constructed at Pinewood. I was working on a block that got quite a lot of exposure because a ‘Greyhound’ bus crashed into it during a ferocious windstorm and other draughtsmen were drawing up the other side of the street. When we stopped to eat our sandwiches one lunchtime, someone suggested an alternative way of getting a credit for our work. It is thus that, if you concentrate really hard during the big action scenes at the end, you will see a little sign on one of the buildings which reads ‘The Laugier Trust’. I had finally got my name on a film!