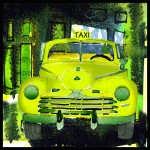 In December 2013 Barack Obama and Raul Castro shook hands when they met in South Africa at the funeral of Nelson Mandela and many commentators wonder if this might eventually lead to an end to the diplomatic stand-off between Cuba and the United States that has existed for most of our lives. We wanted to go and see the country before it happened – and are still digesting the experience – but our first impressions are of:

Big American gas-guzzling cars, lorries and buses make up around 75% of the road traffic and most road vehicles date from the 1950’s or earlier. A lot of the bodywork is patched and filled and some vehicles seem to have vital mechanical bits missing, such as exhaust pipes, so clouds of blue smoke follow them through the streets. Horse-drawn carts and bike-taxis deal with a lot of local transport in provincial towns and tobacco fields are ploughed using oxen.

Political slogans and logos instead of advertising:

Revolutionary and anti-American slogans, quotes from the leaders of the Revolution (such as Fidel Castro and Ché Guevara) and political logos are found everywhere, painted onto the walls of urban buildings and on hoardings in the suburbs of towns. Advertising of anything else is relatively low-key so it’s sometimes quite difficult to work out whether a room with a window onto the street is a shop, or what a bank looks like.

Beautiful old buildings that are falling down:

Nothing records the history of a country quite as well as the buildings left behind by its rulers, and Cuba is no exception. Several centuries of Spanish occupation resulted in the construction of castles, churches, theatres and many other beautiful colonial and neo-classical buildings, right up to the end of the 19th century. When Cuba became a republic in 1902 American money arrived, and Havana was a base for the American mafia during the prohibition era when Art Deco was the architectural style of the moment. There were a few ‘modernist’ buildings in the fifties, a few ‘communist-realist’ buildings after the Revolution and the restoration of a few ancient buildings in recent years. With its status as a World Heritage Site and with the help of funds from UNESCO the city centre of Havana is being restored but looking at the condition of the majority of urban buildings it would be easy to believe that no new construction – and no building maintenance – has been carried out for more than half a century.

It is virtually impossible to sit down for a meal anywhere in Cuba without live music – often heavily amplified and often featuring a repertoire that has nothing to do with Cuba, with Beatles music being very popular. At its best, the live music we heard was superb and we were particularly impressed by “Quarteta Isla” who played in the restaurant where we ate in Trinidad. Check out the astonishing guitar solo at: